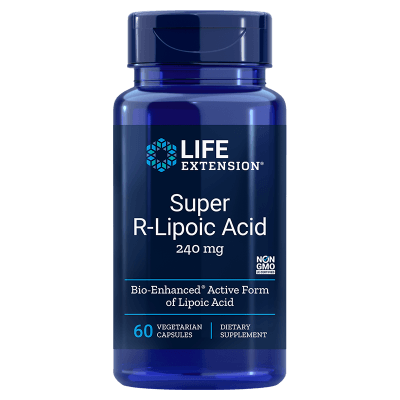 Super R-Lipoic Acid is truly unique antioxidant that not only protects the cells against free radicals but also supports energy production in the cells at the same time. This means that Super R-Lipoic Acid both allows cells to produce energy and function under better-than-normal conditions, providing your body with the energy it needs while protecting the cells for better cell function throughout the body.

Lipoic acid takes two forms (isomers). The R form is made by your body and the S form is chemically produced. Pure R-lipoic acid contained in Super R-Lipoic Acid is more potent than a combination of the two forms, which conventional alpha-lipoic acid supplements typically contain.

Although antioxidants are great for protecting the cells against free radicals, they are not known to support cellular energy production. Super R-Lipoic Acid is therefore truly revolutionizing because it is both a potent antioxidant which also supports healthy mitochondrial function. Unlike many other forms of lipoic acid, the unique Super R-Lipoic Acid is more bioavailable, stable, and potent than pure R-Lipoic Acid. Achieving 10–30 times higher peak blood levels than conventional R- lipoic acid, this is truly an out-of-the-ordinary antioxidant.

If you are taking glucose lowering medication, please, consult your medical practitioner before using this product.

A food supplement should not be used as a substitute for a varied and balanced diet and a healthy lifestyle.