RENTONE™ is a unique formula for kidney and urinary support put together at Ayush Herbs using a combination of Eastern and Western herbs, in addition to other nutrients that improve the effect of the elimination system.

Didymocarpus pedicellata is an Ayurvedic herb also known as pathar phori. Saxifraga ligulata, Tribulus terrestris, and Rubia cordifolia are known for having kidney supporting function. Ocimum sanctum (holy basil) is used in the formulation for its immune-supportive properties. Shilajit is an asphaltum (mineral pitch) obtained in the Himalayan region of India and is considered a rasayana (adaptogen). Shilajit contains at least 85 minerals in ionic form and has been used traditionally for centuries for genitourinary and immune support, as well as for its aphrodisiac properties. Arctostaphylos uva-ursi is a European herb, the leaves of which contain 10% of the bioavailable principle, arbutin, which splits into glucose and hydroquinone in the kidneys.

Cranberry has also traditionally been used to support the bladder and urethra. Mimosa pudica (also known as lajja, or lajwanti) is traditionally used for urinary system support. Beans of Dolichos biflorus, or kulatha beans, are used traditionally in support of urinary health. Cyperus rotundus produces tubers known as soucher, which support the renal, digestive and integumentary systems. Crataeva religiosa or varuna (three-leaved caper), contains saponins and tannins in its bark. In Ayurvedic medicine, varuna supports the bladder, helps support a healthy inflammatory response, and supports the genitourinary tract. Achyranthus aspera (apamarg) is traditionally used to normalize pH. Altogether, this is one of our most complex and powerful combinations to provide support to urinary and kidney health.

1 caplet one time daily or as directed by your physician. 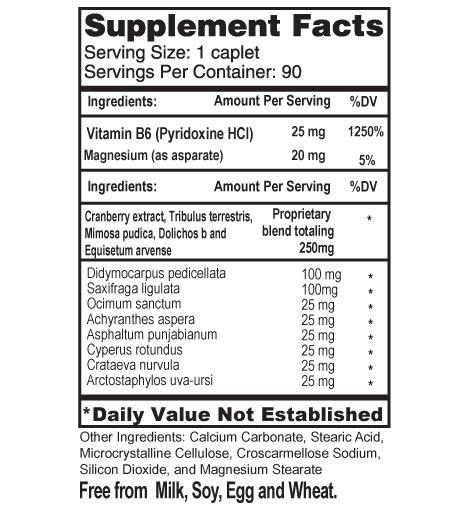